Why Companies Are Buying Up Assets in the American Cannabis Market

CannabisNewsWire Editorial Coverage: Canada became the first country in the G8 to legalize recreational cannabis. With all the buzz surrounding Canada’s cannabis boom, savvy investors have begun to assess the U.S. market, focusing on companies such as Chemistree Technology, Inc. (CSE: CHM) (OTCQB: CHMJF) (CHMJF Profile), which in July 2018 purchased a suite of physical assets, currently under lease to Sugarleaf Farm LLC, a I-502 Tier 3 licensee located in Sedro Woolley, Washington. This moved was fueled by movement north in Canada, including large Canadian cannabis companies such as Origin House (CSE: OH) (OTCQX: ORHOF) and Namaste Technologies (TSX.V: N) (OTCQB: NXTTF), which  are already seeing major success as their products continue to sell well across the country. While newer entrants in the cannabis industry such as CannTrust Holdings (TSX: TRST) (OTC: CNTTF) and iAnthus Capital (CSE: IAN) (OTCQX: ITHUF) are creating their own product lines and playing catch up with major brands that consumers are already familiar with. 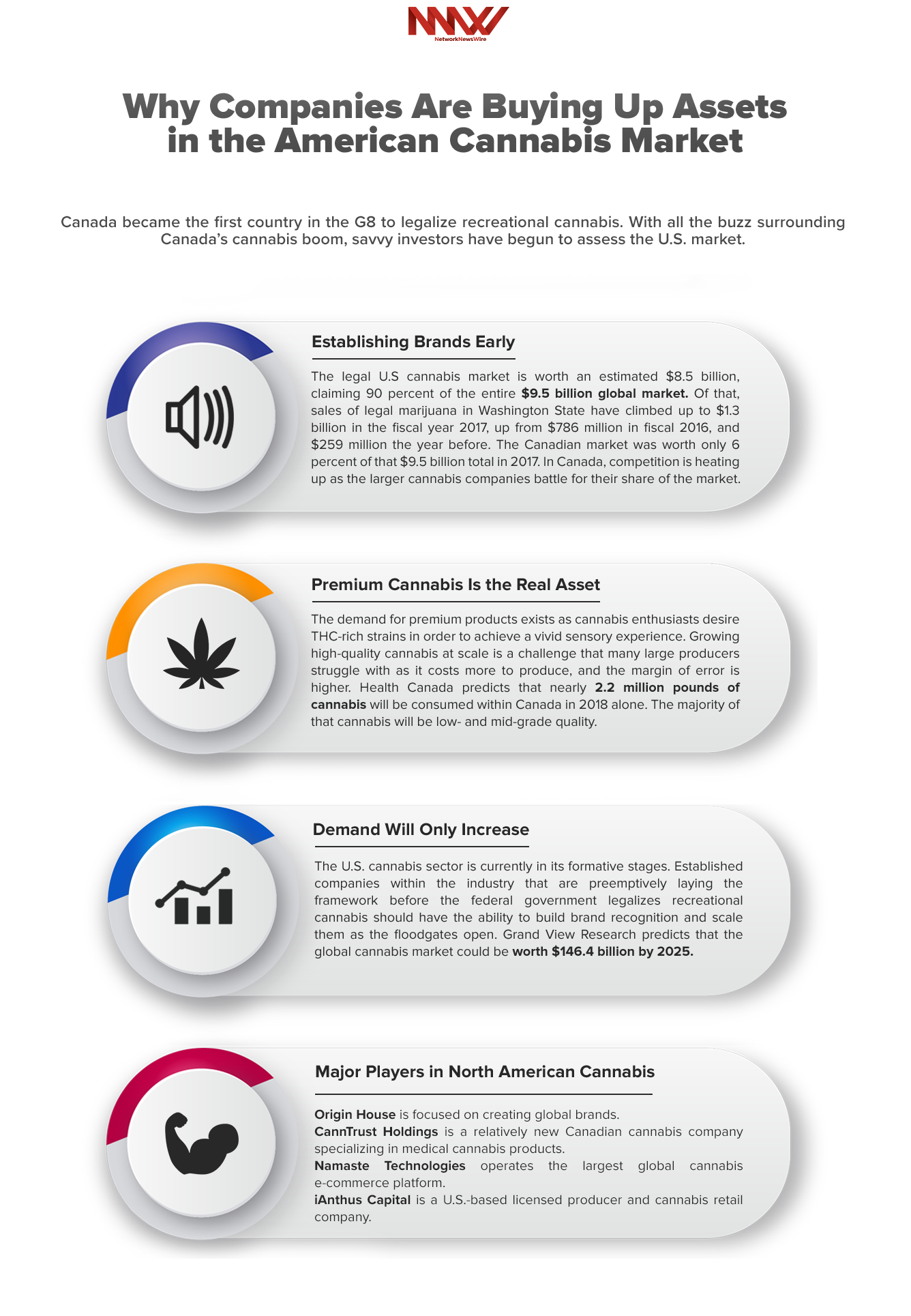 Large-scale cannabis legislation has never existed to the extent that it now does in Canada. With major Canadian companies creating brands that resonate with cannabis consumers.

The legal U.S cannabis market is worth an estimated $8.5 billion, claiming 90 percent of the entire $9.5 billion global market. Of that, sales of legal marijuana in Washington State have climbed up to $1.3 billion in the fiscal year 2017, up from $786 million in fiscal 2016, and $259 million the year before. The Canadian market was worth only 6 percent of that $9.5 billion total in 2017. In Canada, competition is heating up as the larger cannabis companies battle for their share of the market. They are relying on their brands and name recognition to help them achieve success.

However, the U.S. cannabis market is shaping up differently. Due to cannabis being federally illegal in the United States, cannabis companies are unable to ship their products across state lines. The unique state-by-state approach to legalization has provided Chemistree Technology, Inc. (CSE: CHM) (OTCQB: CHMJF) with an ideal environment to build its brands through the production and sale of premium cannabis in California and Washington. It has also shielded American companies from an influx of foreign product.

Chemistree is another company that is focused on establishing quality brands. The company originally acquired Sugarleaf’s assets in Washington in order to augment its product line with a desirable premium brand. Sugarleaf is already featured in over 50 dispensaries within the state, with estimates suggesting that it will penetrate over 100 stores by 2018 and as many as 200 stores by 2019.

Sugarleaf’s signature White 99 strain has a THC level that registers between 28–32 percent. This is incredibly high even when compared to some of the premium cannabis strains that are being grown in Canada. Sugarleaf’s master grower, Jason Flynn, is one of the many reasons Chemistree chose to acquire the brand. Flynn and his team have won two consecutive cannabis cup competitions for their strains, including the 2014 People’s Choice (Presidential Kush) and 2015 People’s Choice (White 99).

Chemistree also managed to purchase property in the middle of California’s cannabis-friendly Desert Hot Springs for a reasonable $1.23 million. The site is large enough to support up to 205,000 square feet of greenhouses spread out across three facilities. Once fully operational, the company could produce nearly 50,000 pounds of cannabis per year. Desert Hot Springs is a popular cannabis region where there are 3.78 dispensaries for every one thousand people, which is the second highest pot shop density in the state.

Premium Cannabis Is the Real Asset

The demand for premium products exists as cannabis enthusiasts desire THC-rich strains in order to achieve a vivid sensory experience. Growing high-quality cannabis at scale is a challenge that many large producers struggle with as it costs more to produce, and the margin of error is higher.

Health Canada predicts that nearly 2.2 million pounds of cannabis will be consumed within Canada in 2018 alone. The majority of that cannabis will be low- and mid-grade quality, which wholesales for a lot less. Premium cannabis, while more difficult to grow, does provide companies that can grow it with higher profit margins. According to Deloitte, high-quality cannabis could sell for up to 12 percent more than lower quality flower.